As the 2016 French Open Tennis began a couple of weeks ago, the withdrawal of Roger Federer through injury was  major story, both from a sport perspective (Federer remains a leading contender and his absence will be a major boost to his competitors) and from a data perspective (Federer is so consistent, that he has not missed a grand slam tournament since last century). This got me interested in looking at tennis data, resulting in the visualisation below. Click on the static version to interact: 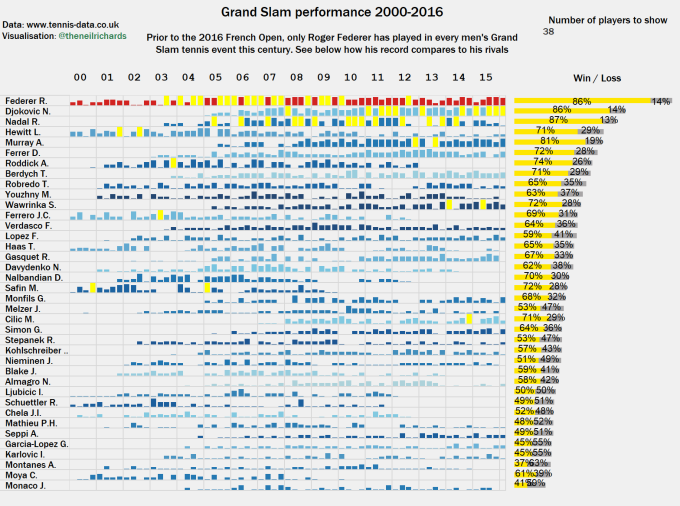 I’ve highlighted Federer’s Grand Slam record in red at the top of the chart, and have mentioned it below the title. But after getting my data from tennis-data.co.uk, I felt my data was just too good to focus on just one story. So many other things stand out to me: the extraordinary win records and grand slam histories of Nadal and Djokovic; the dogged longevity of Hewitt, still playing 13 years after his last Grand Slam win; the remarkable consistency of Murray and rise of Wawrinka, the unfulfilled potential of Del Potro or Roddick, and many more.

I don’t show this as an example of a highly sophisticated visualisation, or one that uses any technical skill whatsoever. But I do think it’s an example of a fascinating data set (if you like that sort of thing) which doesn’t need to tell a story. If anything, this has gone in the reverse direction – I’ve used a story to prompt me into investigating, visualising and presenting data for the reader to delve further by themselves.

In my professional work, we analyse the data using various statistical and analysis tools and look for stories for our clients, which we then detail in written reports backed up by graphical charts. An interactive visualisation is an extra tool for our client to drill into the data in any way they like, so it feels like a chance for the dashboard’s user to find their own additional story without me leading them down just one path. Hence, I think, the desire not to constrain or focus on a particular story over and above others. This also shows in this previous post on global famous people through history. As discussed in that post, there were opportunities to focus on many subsets or stories within the large set of names in the data, yet I wanted to present them all.

Here’s another example. The spiral graph below has been, rightly, widely shared and admired. It’s achieved its goal perfectly – raising awareness about global temperatures rising.

The thing I like most about the original is the way that the very last year and a bit spirals noticeably away from the centre. It allows us to use emotive terms such as “spiralling out of control”. However there are downsides to it too: (what do the colours mean? Can you easily make out trends in any other year pre-2014 when it has finished? Do the red circles mean anything?) So, as a #makeovermonday challenge a few weeks ago, it was an opportunity to produce a still version of the visualisation

My version is below. I must have done something right as it was named first “viz or the day” by Tableau Public, and then “viz of the week”. Again, click the static version to see the interactive version. 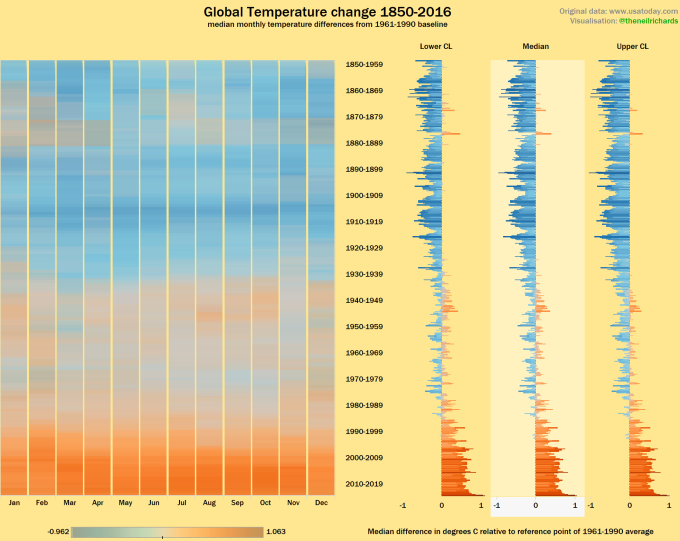 Here, I elected to tell no story at all. As far as I’m concerned, there is only one story, and that is that global temperatures are rising (sorry, climate change deniers, but it’s true). To me, the blue and orange in the visualisation tell that story, so there’s no need for me to over-state it.

A further danger in telling a story is in getting facts wrong or making inaccurate conclusions. I saw other otherwise excellent visualisations making conclusions which weren’t correct (rising temperatures are down to the El Niño effect – incorrect, or at least not strictly accurate, because this is an occasional event that only takes place in certain years therefore does not affect every year; temperatures have risen by over a degree since 1990: incorrect, the baseline is averaged over 1961-1990). As a visualiser, we don’t always have the scientific background or access to the original resource/journalism which has generated our data, so we need to be careful not to overstate our conclusion.  In my opinion, if we’ve designed well, there’s no need – the reader can infer the conclusion themselves.

So I prefer not to tell a story with my visualisation if:

I don’t have the experience or authority in the field of data visualisation to say that this is what you should do in these situations – these are just my thoughts on how I approach things and the reasoning behind those thoughts. So instead I’d love to hear feedback, whether you agree or disagree with my thinking.