Part 1 was posted a few days ago here, featuring numbers 1-8. We’ll jump in at number 9.

9. Tableau is moving into data preparation.

With the announcement of a three-year roadmap followed by the developers on stage, Tableau announced a raft of new features large and small. These are all well documented now in a number of blogs (and Tableau’s own website here). As an aside – on the way is the ability to import from PDF. Wow! But the one I want to focus on is Project Maestro. This is Tableau’s name for a suite of data preparation tools within Tableau itself. As a one-man team at work, I spend a lot of time cleaning, manipulating, reshaping and pivoting, but high-end data shaping tools such as Alteryx are prohibitively expensive. This seems to be a direct rival, and on speaking to people who use Alteryx and the like, they have good reason to be worried! I’m excited to be able to have much more data-wrangling available within the visualisation software. It feels like a game-changer, and it’s likely to raise the game of Alteryx (other data preparation software is available!) too. I’m sure they’ll do things to stay ahead of Tableau’s data preparation capabilities.

10. An artistic solution is often better than a complex solution

Michele Tessari of Tableau gave a talk about Artful Data. I was expecting a session about nice artistic visualisations but I really liked the way he balanced the artful approach with the analytical. Best example was in calculating and displaying the median of a dataset. The string of complex calculations left most of us open-mouthed in complexity. And yet, set up a curve showing cumulative percent, and hey presto the 50% mark is the median. Done in seconds, more easily, just as accurate, and a clear example of the advantage of an artful visualisation over a complex set of calculations.

11. Make sure your visualisation stands up in greyscale

There’s so much talk in data visualisation about correct use of colour. For that reason, this one piece of advice from Andy Cotgreave (which I haven’t heard before) seems counter-intuitive at first, but makes perfect sense. If you have a well-chosen colour palette then it should be perfectly readable in greyscale (just black, shades of grey and white).

Rather than critique some visualisations out there, I’ve decided to put a couple of my own more colourful works under the proverbial microscope. Time to admit that the first one (a France tile map using a large range of pastel colours) has not worked well in greyscale. The second (a heptathlon-themed visualisation) has worked nicely in my opinion, with the full range from green through yellow to red distinguishable in the Overall Position column.

One out of two looks OK – perhaps I should go back to the drawing board with the France visualisation!

There were many separate sessions on a common theme – the idea of using visualisation for a good cause. Schedule clashes were such that I missed sessions about the work Tableau Foundation are doing to support non-profit organisations, as well as a great talk about the work of Tableau geniuses Datablick and how they are using tableau mapping to help eradicate malaria in Zambia. I didn’t attend that talk because I don’t really have experience mapping in Tableau, but have heard nothing but good from those who attended and those who have taken part. But in addition to this, the final gathering of the conference introduced the idea (and hashtag) of #VizForSocialGood (from Chloe Tseng/@datachloe again). I like this. As we continue to learn and improve, it’s important to work on personal projects you want to work on and enjoy (as I alluded to in the Steal Like an Artist section here). But I think that should include not just cricket, or music, or books, but important causes, especially as presence in social media networks grows. I refuse to use such a cringeworthy term as a New Year’s “Vizolution”, but it’s definitely on my list to do more of over the next year. And soon.

Another technical takeout here, which I won’t write too much about. I have to include innovations in survey data reporting though. Zen Master and leader in the field of Tableau survey data reporting gave a talk on new ways to visualise survey data given recent improvements in version 10. Most prominent was the “double pivot” –  a way to pivot demographic data and merge back with rest of the pivoted survey data. The upshot is a great way of showing traditional banners of demographic/dimension data. Survey data is my bread and butter professionally, so it’s raised some interesting possibilities for professional work. So it’s included in my list.

14. Let the Data Decide the Visualisation

Another tip from an Andy Cotgreave talk – is “Let the data decide the Viz.” I like to think it’s obvious but it’s such an important thing to bear in mind that it bears repeating. Particularly within the confines of an environment where you might be keen to try something new. You can’t just learn how to do a sunburst chart and decide you’re going to use it for your next visualisation. Data first, then visualisation type, not the other way round. Below is a very famous visualisation which Andy referenced – creatively and brilliantly set up to represent descending blood representing casualty numbers. But it only works so well because the data fits.

15. A word on Tableau’s community

Leaving the best to last, but I have to be careful here. A few months ago, Ben Jones of Tableau Public wrote this excellent blog pos about building a thriving community: http://dataremixed.com/2016/07/building-a-thriving-community/ – in particular including this graphic

I said I need to be careful here – with the welcome I got from so many of the community at the conference I’m in danger of rolling down the back of the hill straight into the love fest! I can’t talk highly enough about the welcome I received. It seems that if you (a) do a lot of visualisations, (b) tweet a lot, (c) have a blog that people read (this one, believe it or not) and (d) are English, for added novelty value, then there are so many people to meet, and so many people who recognise you. People, some of whom I didn’t know but many of whom I admire, introduced themselves, shook my hand and just wanted to share conversations and experiences (and sometimes beers!). I thought of mentioning everyone here who I met who I spent time with and made my experience better in their own way. But it’s no exaggeration to say there are too many. In fact, much too many. And to single out just a few would be unfair. But you all know who you are, and thank you all.

Added to this was a genuine big surprise. Tableau Wannabe Podcast Hosts Emily Kund and Matt Francis host the “Vizzies” awards, for various categories  voted for within the online Tableau community. The (joint) award of “Notable Newbie” for me, presented on the final morning, was the icing on the cake for me. And it was a hell of a good cake even before then.

Here’s a link to Matt and Emily’s podcasts including one with more details on the Vizzies (I’m not sure the awards are published yet).

And here it is. 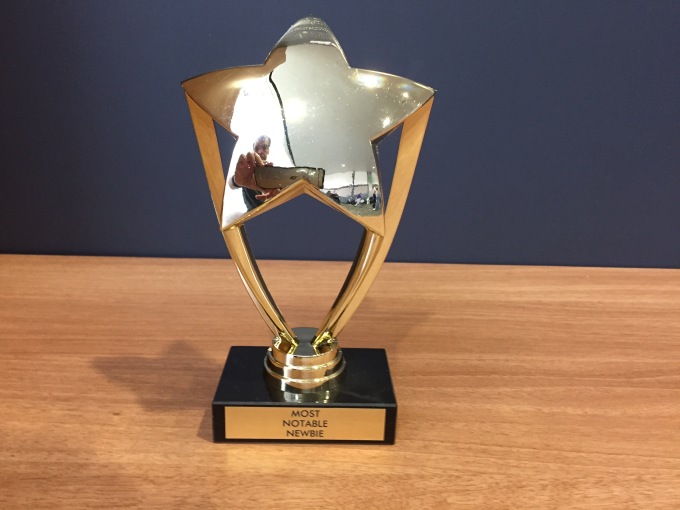 Back to Ben Jones’ blog post and diagram, it’s true the “love fest” isn’t the most constructive way for the community to grow. Perhaps we can make an exception for 13000 or so like minded people meeting face to face (this sounds bad doesn’t it?!). But I love the idea of “iron sharpens iron”. The result of the face to face contacts and friendships I made is that the number of people I can call on for constructive criticism as well as help and advice has greatly increased. I’ve already been pleased, since the conference, to be constructively talking to those I previously only knew tenuously. And I genuinely think that one week in the year spent talking about visualisations, meeting people and socialising (talking about anything but visualisations!) leads to the other fifty-one weeks with a stronger support network. Of course there’s no need to wait for national congresses – we are all encouraged to join local user groups and meet-ups, and I’m delighted to have taken part in the inaugural Birmingham Tableau User group already since returning from the conference.

That’s it really – I could have a miscellaneous section on non dataviz-related weird and random stuff, such as (a) people take pigs onto planes from Austin airport, (b) a previous governor of Texas could have been my ancestor, (c) the giveaway squishy Tableau brains make great cat toys (and I admit that’s a touristy “Keep Austin weird” mug accidentally in the background, or (d) the local Voodoo do(ugh)nuts were amazing, even if shaping them into a “T” for Tableau was perhaps more suggestive than intended, but it’s not that kind of blog. Oh, go on then. Hoping to continue this blog series in a little under twelve months time from Vegas in 2017! 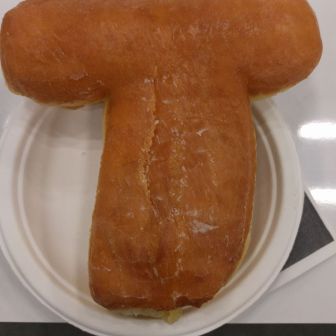