Lets’s start with a simple recent viz – under the tag of #FixitFriday a group of people took a look at a great initial visualisation on the ft.com website to look at other ways of showing the data. There were some great small multiple type visualisations created, whereas I went for something else: some ranked slope graphs. My effort isn’t great – in working with ranked values the original numbers are harder to find and the countries themselves will also only show on hovering. Click the static version below to see the interactive Tableau version. 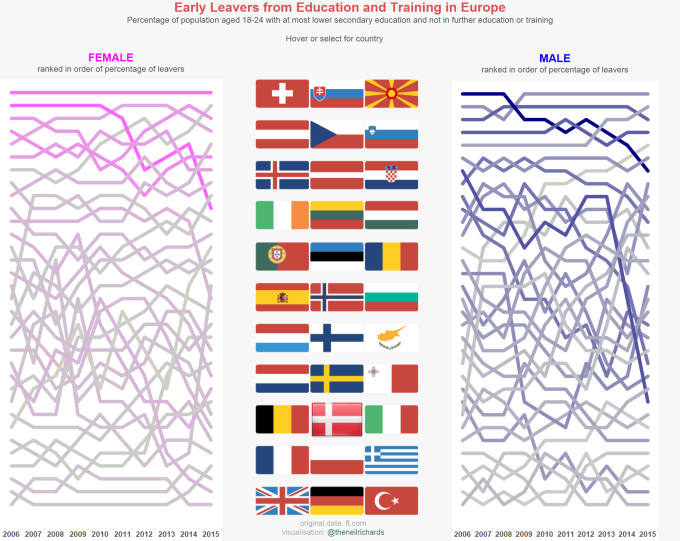 But my solution for ease of use was something I haven’t tried before. Flags. A large panel dividing the two charts allowing the user to navigate simply and highlight male/female figures based on the flag of the country selected. But is this good, or is it overkill? The average British reader should know their own flag, and most can pick out, say, Cyprus, Sweden or Switzerland. But which is Slovenia and which Slovakia? Does it matter if it’s not intuitive, so long as the reader knows how to explore? This is about a visualisation – and you can’t get much more of a visual way to represent a country than her flag, right?

I’m in two minds about this – one of the hardest things to learn is to know who you are designing for. If I design for *me* – a bit of a nerdy data person who knows all his flags, then I think I’ve made a good visualisation here. If I’m designing for a wider audience, then I’m not sure. And more importantly, although the user can explore to find out, I don’t think my creation shows the main point – there is no emphasis on the gender gap here. You can’t see anywhere that males stay longer in education than females in all 28 EU countries featured. So – could do better.

I’m not overly concerned – this isn’t for anyone to see, more just an exercise in playing with data to try something new. I can guarantee you’ll find better “Fixits” out there which were far more intuitive. My aim was to use flag icons constructively and generate opinion on how useful they are. Job half done already I hope.