This week I began work on a Wimbledon-themed viz. I’m sure when I started this blog I had a stubborn determination not to use the word “viz”, rather to use the full term “visualisation” wherever possible. But I have a feeling it didn’t pan out that way, and given my propensity to veer off-topic, anything that saves ten characters of typing can’t be a bad thing.

And once I had the bare bones of my Wimbledon viz (which I will talk about in a separate blog post), I began to wonder what the best background colour would be. I’m not sure if there are many (if any) hard and fast rules or guidelines on the subject, so I asked the question of my peers on twitter. This was the question I posed:

And these were the three prototype dashboards I included with it (click any image to enlarge): 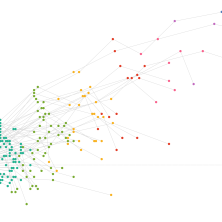 My visualisation was deliberately vague at this point, but my thoughts were that I wanted seven or eight colours for my circle marks. I’d chosen a full range of colours in my palette, and was happy that white showed the marks off well. But were the lighter marks even clearer if I chose black? And what about a third colour – surely the one colour associated with Wimbledon is green – would it be good form to go for a green background?

It’s not possible to do a poll in twitter if your post contains images, so i judged the responses either by replies, or “likes” to relevant replies. So I haven’t quantified the results into scores, results or favourites, but this was enough to convince me that there were several outright preferences for each of the three options.

It was not only great to get the feedback, but some of the thinking behind it too: Here is a collection of responses:

Depends on your goal. If the hue circle encoding is critical, white. If the marks can be one color, white or yellow on green w 10% lines.

Black, white then green. Curious to see how this evolves.

I agree. The green background is too green! Looking forward to the viz.

Black the way they are set now. If you adjust the size of the dots and darkness of lines, white would work too.

White as well. The other colors seem to emphasize the lines a bit more than the points

I do like the green from a color meaning perspective. Not sure what the dot colors mean, but could you do green color line w/ black bg?

I’d say green, but I would lighten the green so its not too overbearing to look at so it reflects the light grass colour of Centre Court.

What about a muted black…like a darker charcoal? This would give higher contrast like the black but wouldn’t be so saturated.

So, where to start?! There were more responses just expressing a preference (mainly for white or black). Green seems to be the most divisive, with many who liked it saying they would consider changing the green. Not to mention those who didn’t like it …

It’s true that all of the options I chose were very full-on in colour: the white is #FFFFFF, the black is #000000 and the green is, well, bright! What the responses did tell me though, as well as there being no right or wrong answer, is to carefully consider the importance of a number of factors:

I do like to choose very pale backgrounds – light shades of yellow or orange give a nice cream effect just removing the saturation of pure #FFFFFF white (and light blues/greys a similar effect with a cooler rather than warmer tone). But I’ve done a few sport-related visualisations where I’ve gravitated to a light green grass-themed background without thinking, whether it be golf, football or cricket. I’m not sure it adds anything or is necessary though. And recent Makeover Monday submissions are often themed around one particular country – in these cases we see many submissions where colour schemes go straight to national flag colours. Bright reds, golds and whites for Germany, or bright orange colours for Dutch-themed visualisations. To me it seems predictable or cliché – but it would be unfair of me to call out any particular examples. I’m guilty of it myself, having gone straight for a green-and-gold themed dashboard for an earlier Australia-related example earlier this year: 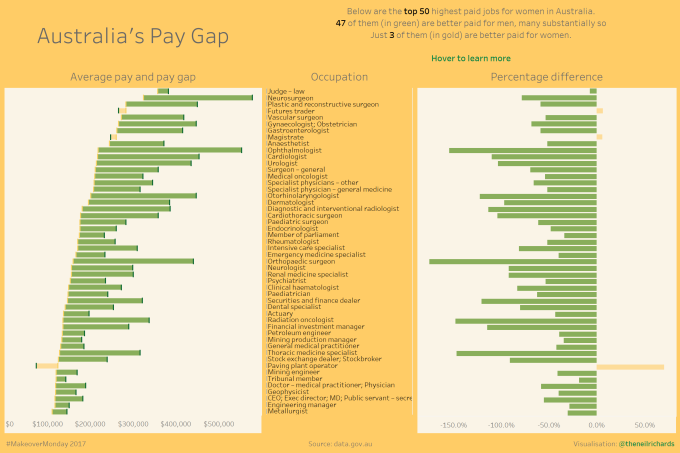 I have learned one snippet of advice the hard way: if you are planning graphical wizardry or anything that involves overlaying transparent layers, be they images or graphs, there are only two colours that work perfectly, particularly when using Tableau. Black, or white. This I found to my cost in my recent safari-themed rhino viz. Black on black is black, and white on white is white. But light brown on light brown is darker brown – trying to align different shades of a non-monochrome colour is very difficult! Want to know why the likes of the Data Duo or Jonni Walker  are among the best out there in their graphic style dashboards? Two words: black backgrounds. OK, two more words: incredible talent, but you get my point.

My dilemma started from the fact that I’d chosen a wide ranging “rainbow” palette for my circle marks. On recollection, I wanted the colours to have more of a sequential feel to them, since they were to reflect each round of the Wimbledon tournament. I moved away from my initial choice and on to the coloured scale below. Having made that choice, I opted for a darker background, since I prefer the contrast here to the contrast you would get with a pale background. But that’s no reflection on the advice I was given, since I moved the goalposts myself! I did agree that a charcoal looked better than a more intense black in this instance.

So I didn’t get my definitive answer in the end. I’d say the answer is “it depends” but if you know and follow the same famous Tableau evangelists that I do, one in particular, you’ll have heard that answer many times already. What I did get was a range of considered opinions and well thought out responses from my peers in the community. Much better!